I've actively played and followed Guild Wars 2 since launch back in August of 2012. Since then, I've had the opportunity to experience a plethora of builds across all professions. Being an MMO, Guild Wars 2 has naturally undergone extensive changes throughout its lifetime. All aspects of the game have been tweaked at one point or another, and play-styles for professions have evolved over time.

With that said, my all-time favorite profession has always been Thief. I've spent probably way too much of my time enjoying thieving. There is nothing else quite like it. The super high risk / high reward nature of the profession makes it incredibly fun to play. Subtle mistakes can lead to your demise and precise timing can lead to remarkable kills. High damage, mobility, evasion, and stealth makes it the winner in the fun-factor category. 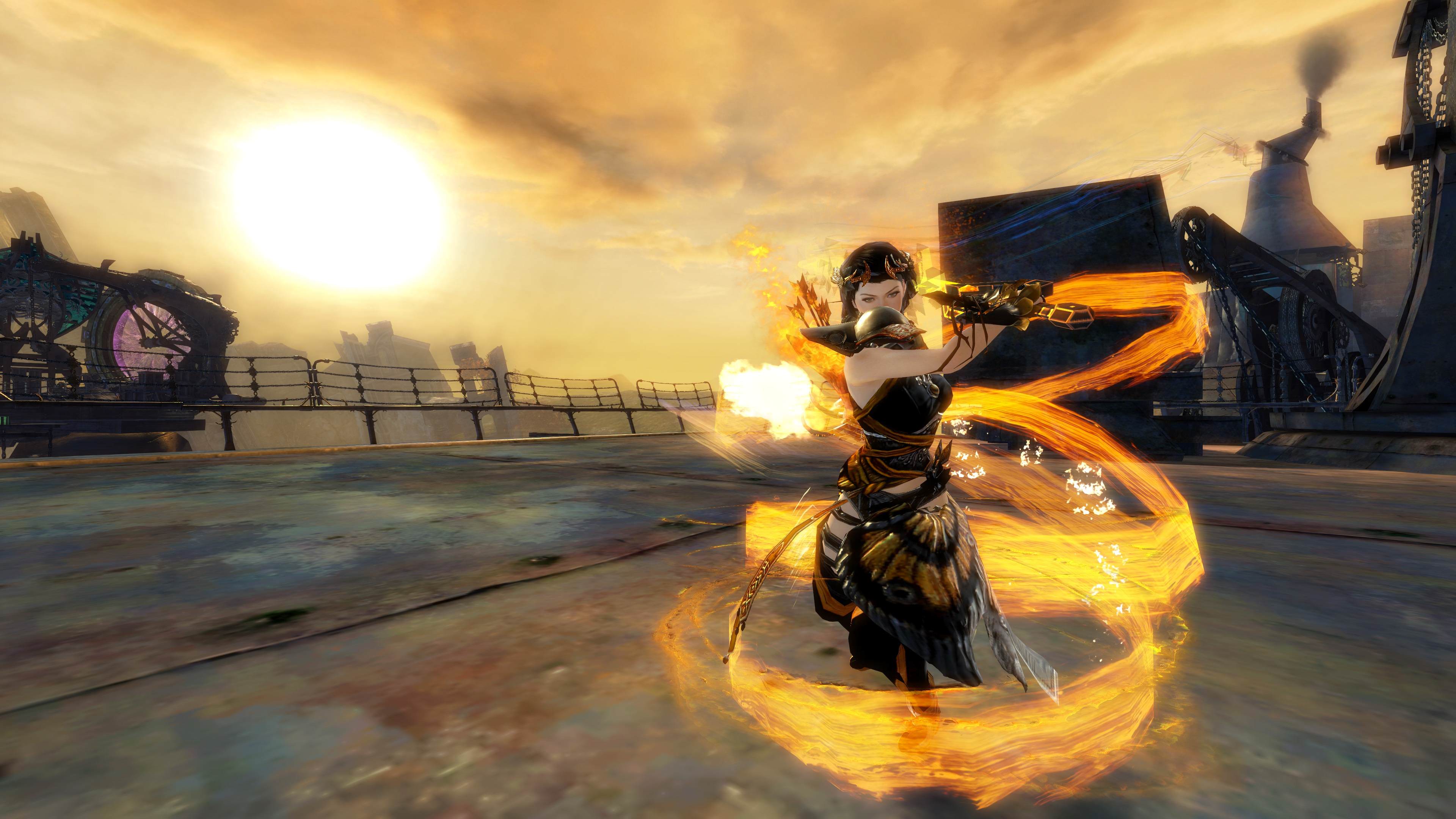 The aim of this post is to provide players with a somewhat comprehensive resource to this profession. Most of the information here is objective, with tidbits of history and anecdote thrown in from time to time. Finally, the entirety of this post is solely in the context of WvW - other game modes are not considered here.

Let's discuss the methodology behind playing a thief successfully. As with any profession, thieves are equipped with a set of offensive and defensive mechanisms. What makes thieves truly unique is their initiative system combined with the nature of their defensive tactics.

Arguably the most important realization to have as a thief player is the following:

Staying alive in a fight is not a passive effort - it requires constant, split-second decision making.

This is a consequence of thieves having the smallest health pool in the medium armor tier along with the scarcity of defensive traits in specialization lines. This combination leads to an incredibly fragile profession.

A by-product of this design is fun. Lots of fun. In fact, I find thief to be the most enjoyable profession. The attention to detail demonstrated while playing can be incredibly rewarding. I hope this resource will guide you through learning the art of thief.

Power-based builds tend to outnumber condition-based builds, though, both are competitive. This has always been the case. A notable difference between thieves and other professions is the stealth attack. This effectively replaces the auto-attack skill on a given weapon set with a more powerful ability when in stealth. Here are all stealth attacks:

Path of Fire introduced the Deadeye elite specialization, giving thieves access to another weapon - the rifle. Additionally the Malice system was added, further altering the stealth attacks with "malicious" versions when using this specialization.

Thieves employ defensive measures through combinations of evades, shadowsteps, and stealth. The key is damage evasion, not damage mitigation. For this reason, all remotely competitive thief builds over the years have maintained a reasonable balance of these three defensive qualities.

Weapon choice plays a huge role in determining which defenses are available in greater quantities. For instance, the D/P weapon set offers high stealth potential while a Staff offers high evade potential. Such considerations need to be made when crafting a build. Equally as important is choosing utility skills and traits to balance out available defenses.

A skill exclusive to thieves is dual wield. This effectively determines the middle ability on the weapon skill bar by thematically combining the main-hand and off-hand weapons (obviously this does not apply to two-handed weapons). This leads to a large number of potential weapon combinations.

Another exclusive skill that really sets thieves apart from other professions is the initiative system. Initiative is a resource that is consumed when using skills on weapons (this also means that weapon skills do not have cooldowns for thieves). A consequence of this is that thieves can "spam" their weapon skills.

This is an iconic weapon set that has evolved quite a bit throughout the history of the game. Positioning and timing is needed to make the most of it.

Prior to Heart of Thorns, the majority of the builds were power-based due to the large burst damage potential achieved by following up a Cloak and Dagger with a Backstab.

After Heart of Thorns released, condition-based builds heavily relying on Death Blossom became significantly more popular due (in part) to the changes to Bleeding.

This weapon set is rarely used nowadays. If you come across it, chances are its being run in a condition build.

Possibly the most well-known weapon set, Dagger / Pistol provides ease-of-access to stealth along with high damage with Backstab and Heartseeker. Not much has changed with this weapon since launch, its frequently used in competitive power-based builds.

Stacking stealth is easy and the most common way to access stealth consistently as a thief. Simply place a Black Powder down, then repeatedly use Heartseeker to combo-finish the smoke field multiple times - stacking stealth.

Prior to a patch in Path of Fire, players could aim the camera downward (overlooking the character) that reduced the leap distance of Heartseeker, meaning more could be cast before the smoke field expired. This is no longer possible, but significant stealth can still be acquired with the method above.

Historically, this build was competitive for roaming and dueling. It was common for experienced players to win outnumbered fights. After Heart of Thorns released, this weapon set became significantly less popular - mainly due to the conditions overhaul and the rise of other competitive condition-based builds for thief. It has maintained a similar standing in Path of Fire.

This weapon set is thematically awesome. Dual-wielding pistols is a lot of fun. It's really only usable in power-based builds. The ability that is used in most circumstances is Unload. Massive damage can be unleashed with this skill - a few casts can easily yield a downed player.

For the longest time this weapon set was never used. It became somewhat popular for roaming and dueling after Heart of Thorns was released thanks to some updates to traits and synergy with Signet of Malice. It still sees play in Path of Fire.

This weapon set is used in power-based builds. The main appeal is Infiltrator's Strike for mobility and Pistol Whip for the high burst damage. There are some combos to be aware of since Pistol Whip roots the player during its cast. Shadow-stepping onto an opponent during the cast can lead to significantly better results. Out of all of the weapon sets, this one arguably has the highest burst damage if set up properly, but it can be inconsistent.

Overall its a great weapon set to use and has been impactful ever since the game launched.

This weapon combination has always been competitive. Incredible mobility and evasion are offered along with decent access to stealth. Large burst damage is possible with Flanking Strike and Larcenous Strike. The overwhelming majority of builds that utilize this weapon set have been power-based.

Prior to Heart of Thorns, there were numerous builds using this weapon set along with the old version of Feline Grace and Signet of Agility. These builds were incredibly competitive and annoying to face due to the sheer evasion potential.

Arguably the single best weapon in the game, the Short Bow has been one of the most iconic weapons since launch. The majority of competitive builds include this weapon. It offers excellent power and condition damage, poison fields (excellent on downed players and large groups), evasion, and undoubtably the best mobility in the game. It falls into the rare category of weapons that require exceptional reasons not to include it in an arbitrary build.

This weapon was introduced in Heart of Thorns and must be used with the Daredevil elite specialization. It is used in power-based builds and offers excellent mobility and evasion. Damage is also plentiful. The most used skill is Vault. Spam this skill to win. It continues to be a popular weapon in Path of Fire.

This weapon was introduced in Path of Fire and must be used with the Deadeye elite specialization. It is used in power-based builds and offers high burst-damage at incredible range. This weapon offers little defense and therefore requires proper compensation in other areas when designing a build. Many fringy one-shot builds centered around Death's Judgment have come up.

Deception skills are the most ubiquitous. They are all great or excellent and some are justifiable to use in almost any thief build. Many of them require proper timing and execution to be fully utilized. They cover a wide range of uses.

Thieves are not the only profession to have access to signets. As with other professions, signets are quite good. Each of them has seen play extensively in various builds. All signets operate by having a passive ability and an active ability. Thieves have been lucky in the sense that both the passive and active abilities are (and have been since launch) quite good.

Traps are rarely used. Most of the time its for amusement as none of them are competitive. The one advantage of traps is that most players will not expect it - the surprise factor can lead to some cheap kills. At the very least, the skills are entertaining.

Tricks have always just been decent. None of the skills are outstanding, but some of them are certainly quite good. They are themed around hard-to-predict "tricks" that a thief might use in combat. In reality they just compliment the standard aspects of most builds well.

Venoms fill a niche form of gameplay. They appear in less common, but enjoyable condition-based builds focused on improving group offense in large-scale combat. Such builds are known as "venom builds" that, unsurprisingly, utilize lots of venom skills. Unfortunately, venoms are rarely seen outside of venom builds because they greatly reduce survivability.

Daredevil Only: Daredevil builds provide access to this set of utility skills. They are themed around physical confrontation (in light of this elite specialization), but realistically are usable in numerous types of builds.

Deadeye Only: Deadeye builds provide access to this set of utility skills. They are themed around the malice system and are used in all sorts of builds.

Deadly Arts boosts the performance of traps, poison, and daggers. Great for both condition and power builds.

Shadow Arts is all about increasing the defensive capabilities of a thief. Used in perma-stealth builds, and builds that depend on extra survivability.

Mobility, evasion and improvements to the sword are encapsulated in this line. It's used in many types of builds.

Stealing and initiative management are the focus of this line - its excellent for all sorts of builds.

This specialization line provides access to the staff and improvements to dodges.

This specialization line provides access to the rifle, the effect malice, and improvements to stealth.